From John Woo films to kung fu action movies, you can find some of the best Hong Kong movies on the Terracotta Distribution store.

In recent years, 80s and 90s Hong Kong movies, and indeed Hong Kong Cat 3 movies, have seen a resurgence in popularity on physical media thanks to labels like 88Films and Eureka Entertainment in the UK (and in the US, via Criterion Collection).

Here is a guide to some of the best Hong Kong movies on blu ray on the Terracotta store:

1 Made in Hong Kong Set in Hong Kong in 1997 during the year of the handover of Hong Kong back to China, "Three Extremes: Dumplings" director, Fruit Chan, gave us a look at the boredom of life on the cusp of the handover; a boredom that breeds a young generation of delinquents and small time gangsters in the face of an uncertain future.

Shot on a shoe-string budget and a true indie film from Hong Kong, this film deserved all the awards that it received when it was released. The star of the film, Sam Lee, was actually discovered by the director just skateboarding in a housing estate, the perfect example in real-life of the subjects he was trying to portray.

Jackie Chan is undoubtedly one of the most famous Hong Kong actors globally - his unique brand of action and humour is instantly recognisable. His style of action has incorporated influences from films as early as Buster Keaton and Charlie Chaplin - silent films where the comedy of action and reaction, setup and fall, speaks for itself.

This style of action was different to the films made at that time - martial arts films about revenge or honour, or romantic films for mass entertainment - and it was exactly the right time to bring about this light-relief against a backdrop of political unrest and student protests in Hong Kong.

Drunken Master is one of the first examples of this new Jackie Chan direction which carried on through all his most iconic films, giving us so many memorable cinematic moments through his daredevil life-threatening stunts. It started with this. 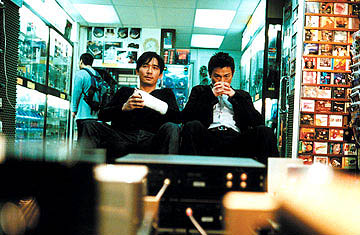 One of the best examples where Hong Kong cinema imported themes from Hollywood cinema, gave it a Hong Kong twist on the tale and re-exported it, must surely be Infernal Affairs.

Like a next-level Donnie Brasco, this film about two moles on opposing sides of police and triads, was remade as The Departed by Martin Scorcese and regularly tops the list of Top Hong Kong movies of the 21st century.

4 Running out of Time The Hong Kong skyline and urban architecture here features as a supporting character, as it often does in many Johnnie To films. Asian superstar, Andy Lau (Infernal Affairs, Shaolin), is a terminally ill patient playing a game of catch me if you can with the entire Hong Kong police force, led by Sean Lau Ching Wan, through the streets of Hong Kong. Asian cinema is well know for the meticulous choreography and dazzling visual impact in it's fight action movies. Here is an excellent example of this, with a young Donnie Yen (Ip Man, Rogue One) in some of the best stunts and fight scenes from this golden era of Hong Kong 80s and 90s action films. No list of Hong Kong films would be complete without an inclusion of at least one Category III movie. So called due to the Hong Kong film classification system (Category III being the equivalent of an 18 - depictions of sex, extreme violence or shocking horror, sometimes all three in one film!) this label stuck as a moniker for the equivalent of the Hollywood B-movies of the 80s, but more extreme and uniquely Hong Kong.

Here in Ebola Syndrome, Anthony Wong plays a deranged man who finds he has natural immunity to the symptoms of the Ebola virus, but he can carry the virus and infect people - and so he sets out to do just that, infect all the people he finds abhorrent or who have wronged him in the past. On to horror of a more gentler and comedic type - Mr Vampire is the example of a'geung see' (mandarin: Jiang-shi) film, the hopping vampire. Unlike their European counterparts, these Chinese vampires aren't fazed by garlic, instead a charm (a yellow paper that has a spell written on it by a Taoist priest) stuck to the forehead will render them motionless - a great device for many permutations of comedic action scenes!

If you are looking for some Hong Kong action movies with a charming story that warms the heart (straight out of the Frank Capra playbook) Miracles, aka The Canton Godfather is one that we would highly recommend. Set in a 1930s Hong Kong, stars a stellar cast including Jackie Chan and Anita Mui, who found huge success all over South East Asia initially as a singer, and then as an actress, in films like Rouge. Shaw Brothers Studio was THE predominant force in film production in Hong Kong during the late 60s though to the mid-80s. Some of the most famous Hong Kong movies were made via this studio after they switched from making romantic films to kung fu action movies in both Cantonese and Mandarin.

It would be nearly impossible to pick just one to recommend, and many such "Top 10 Shaw Brothers film" lists have different combinations of ten films.

Instead, delve into this boxset which has 12 straight up iconic films (plus a whole load of extra items for collectors as well): King Boxer (aka Five Fingers of Death), The Boxer from Shantung, Five Shaolin Masters, Shaolin Temple, Mighty Peking Man, Challenge of the Masters, Executioners from Shaolin, Chinatown Kid, The Five Venoms, Crippled Avengers, Heroes of the East and Dirty Ho. Another Jackie Chan entry, and a trilogy that really pushed the limits of stunt work, with Jackie himself jumping out of double decker buses and sliding down many levels of a shopping mall clinging on to a lighting fixture. This boxset comes with a 100-page bound book alongside all three of the Police Story films, the third of which, Supercop, stars Michelle Yeoh (Everything Everywhere All At Once) as a mainland Chinese cop, partnering with a reluctant Hong Kong Policeforce Jackie Chan - a perfect metaphor for the impending 1997 handover, and a perfect bookend to this list.

So that's the round up of our Hong Kong blu ray recommendations on the Terracotta store - do leave any comments below on what you think is your favourite films from Hong Kong.